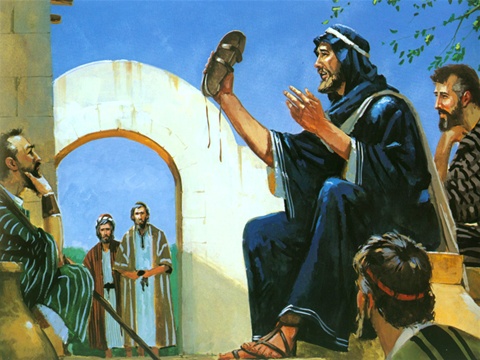 As I attended Bible College way back in the day one of the sayings that I heard my professors say was, "... Christ is in the Old Testament concealed and in the New Testament revealed." The more I reflect on these words the more I increasingly become aware that there are numerous instances where various characters and stories found in the Old Testament's thirty-nine books seem to point toward the reality of this saying.

One particular incident that may shed light on this idea was when the gospel writer Luke penned the account of the two men that encountered a stranger while they were walking the seven miles from Jerusalem to Emmaus following the crucifixion of Jesus of Nazareth. The account is found in Luke 24:13-35. One part that is so interesting relates to how this stranger "opened the scriptures" (the Old Testament) to these two men beginning with Moses and all the Prophets, explaining to them what was said in all the Scriptures concerning himself and the funny thing is they didn't even recognize him. That is until he did something very familiar in the breaking of the bread while having fellowship around the supper table and all of a sudden their eyes were opened and he, Jesus, vanished from their sight.

Another incident occurred in Nazareth, the place where Jesus grew up. It occurred on a Sabbath day. While seated in the local synagogue he is handed the scroll of the Prophet Isaiah. He finds the place in this book and standing up he reads, "The Spirit of the Lord is upon Me because He has anointed Me to preach the good news to the poor; He has sent Me to announce release to the captives and recovery of sight to the blind, to send forth as delivered those who are oppressed to proclaim the acceptable year of the Lord."  He later tells those in the synagogue that this Scripture has been fulfilled in their hearing. Jesus is quoting from Isaiah chapter 61: 1-2. Of course in Jesus' day there were no chapter and verse numbers but what Jesus is telling each of them is that He is the one to whom the Prophet Isaiah was writing.

My reflection today is centered around the Old Testament book of Ruth and how the character Boaz becomes a type of savior for Naomi and her daughter-in-law Ruth. Naomi returns to Bethlehem from Moab with Ruth. It is at the time of year when the barley grain is being harvested. Because Naomi and Ruth were both widows they had no one to assist them as a husband would by caring for their needs. Eventually Boaz notices Ruth as she is gleaning in one of the fields and inquires as to who she is. Once he discovers that she is Naomi's daughter-in-law he begins to take some interest in her by placing her in protected places to glean after the harvesters giving strict orders to the young men working in the fields not to touch her.

When Ruth inquires about Boaz Naomi is recorded in the second chapter of Ruth verse twenty these words, "And Naomi said to her daughter-in-law, Blessed be he of the Lord who has not ceased his kindness to the living and to the dead. And Naomi said to her, the man is a near relative of ours, one who has the right to redeem us." In the Jewish property and relational law the kinsman redeemer was that person who had the right to redeem a relative who had gotten into trouble. Perhaps they had to sell all their property due to a debt they could not pay and if that didn't satisfy the debt they may have had to sell themselves into slavery. The kinsman redeemer, because of his prior relationship with them, had the right to redeem that person and get them out of trouble.

Awesome to see you again with Andre and Mary ann

It is the greatest human privilege, to be loved and to love. Thanks for these thoughts.

So true. The value of kindness to others is invaluable.